SPUC Take Coalition For Marriage Positions Off The Deep End

Today I've seen something that made me laugh and then gape in shocked amazement. It was a picture on Twitter of an anti-marriage equality poster.

I laughed because it seemed so outlandish as to suggest a fake, but then I found it was actually a real thing which stopped the laughing quite quickly. So before we break down its arguments let us just check we all know what we are dealing with.

The SPUC is the Society for the Protection of Unborn Children which, it goes almost without saying, is a pro-life organisation. Last year, according to its about us page, it decided marriage equality was related to its goals of protecting the unborn.

Now let's look at the flyer: 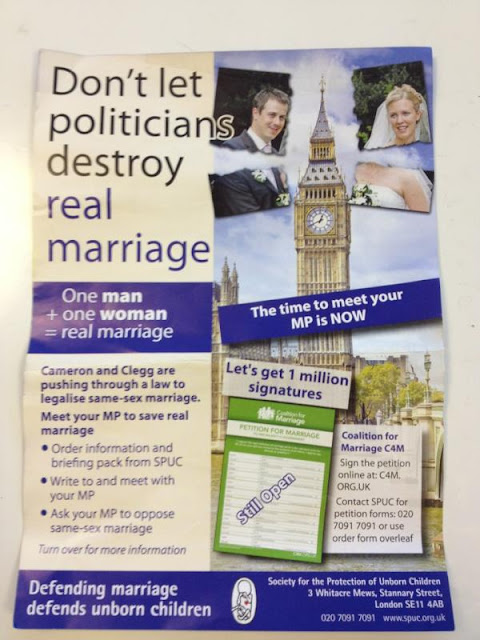 Firstly note their use of a wedding photo ripped in half. What are they implying with that picture? That marriage equality would lead to actual marriages being destroyed? It seems bizarre to have that picture there to be honest as if I marrying Jim might lead to someone getting a divorce.

Now let's move on to what they say. "Don't let politicians destroy real marriage" is very misleading. In what way does marriage equality undermine, let alone destroy, "real marriage" (which they define as the marriage between one man and one woman)? Can someone please explain this to me? There is nothing, not one thing, in the current marriage equality proposals at Westminster or Holyrood that would lead to men and women not being able to marry each other.

Now what I would assume is that this just a highly emotive way of saying that marriage equality will somehow lead to an increase in divorce and broken homes. That is a testable hypothesis. Let us look at one study, which you can see in full here:

The results above show that laws permitting same-sex marriage or civil unions have no adverse effect on marriage, divorce, and abortion rates, the percent of children born out of wedlock, or the percent of households with children under 18 headed by women. Laws permitting same-sex marriage or civil unions may even raise marriage rates, and reduce abortions and the percent of female-headed households with children, even after controlling for many confounding variables and state and year ﬁxed effects. Laws banning same-sex unions, if they are of long duration, generally appear also to have beneﬁcial effects since they are associated with fewer abortions and female-headed households with children, but the seemingly beneﬁcial effects of these laws appear to complement the effects of permitting same sex unions. (There is also evidence that short duration bans are signiﬁcantly but weakly related to fewer divorces.)

We cannot say that we have disproved the existence of a link between laws permitting gay marriage and a negative impact on ‘‘family values’’ indicators, but we can say that no such link is demonstrated in the data that we analyzed here. Permitting gay marriage does no harm, and making it legal may even be beneﬁcial, since it seems to raise marriage rates, reduce abortions, and reduce the chance that children grow up in single-headed households. We believe it is incumbent upon those that posit a link between permitting gay marriage and harm to families and children to put forth evidence that supports their claims about same-sex marriage rights, especially when confronted with evidence that directly refutes their claims.

Perhaps they have access to other studies. A quick check of their background paper and position paper on the issue reveals nothing to suggest they have used them. These papers in no way reflect their claims in this flyer!

Now on to the claim at the bottom "Defending marriage defends unborn children". This implies, quite clearly in this setting, that marriage equality will lead to more abortions. Their background paper says this:

Weakening marriage is in no-one’s interests. Strengthening marriage is in everyone’s interests: the moral environment in which children are conceived and grow up will have a lasting effect on their stability and happiness – and indeed on their survival. Abortion figures reveal the importance of marriage as an institution oriented towards the care and protection of children: in the UK babies conceived outside of marriage are about 4-5 times more likely to be aborted than those conceived inside marriage. Children after birth face greater risks of harm in non-married situations.

Yet again they make claims in their flyer that their papers don't support with data. This paragraph in no way suggests how equal marriage will lead to more abortions and the study I've quoted above shows that there was no link found!

This flyer has little, if any, rational basis. It distorts the issues and does not present the arguments SPUC make on their website against marriage equality **UPDATE, the back of the flyer does present those arguments but my problems with the assertions on the front remain unchanged*** (which are more moral/religious issues and have little to do with incidents of abortion). If this is what the Coalition for Marriage partners are putting out, we need to be very concerned indeed about their commitment to reasonable debate and against homophobic discourse.

If you feel benevolent and particularly generous, this writer always appreciates things bought for him from his wishlist

That is a ****ing disgusting poster. Evil, nasty, wrong, misleading.

I actually was given one of those things outside Westminster cathedral, and how could i hold my temper back I don't know.