Peter Kearney, a director of the Scottish Catholic Media Office, only recently suggested that marriage equality would lead to teachers being sacked for expressing moral views. It's not a frivolous suggestion given past experience and I have the tiniest little bit of sympathy for him on this (although my views on freedom and employment are best summed up in this excellent article from the Law Society Gazette).

However I was slightly amused to see this news story break within days of his comments. A pro-marriage equality (or at least an anti-anti-marriage equality) teacher at a Catholic college has been suspended for taking issue with his Principal's stance on the matter. So do Catholic's only value free speech and moral values when they are their own? Would it be right for Catholic teachers at secular schools to have the promotion of their own personal moral values protected but not at a Catholic school? I'd love to know where Peter Kearney stands on this story!! 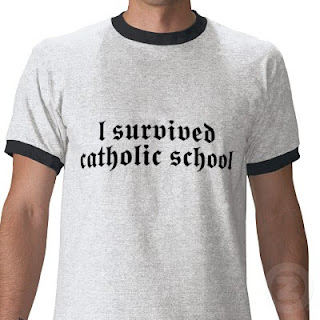 The same issue holds true for this story about a new Catholic school in Cornwall. The educational ethos there goes something like this:

"The whole population is taught that homosexuality is fine and children should accept they can have two mums or dads but they should not be taught that nonsense. It is not right"

Yeah that is nonsense but, of course, teaching Jesus was born of a Virgin makes perfect sense.

Again we must ask: will it be okay for a teacher there to teach about marriage equality or some similar issue in a positive manner and express a personal opinion in favour of it? Or would that be something they'd need to be spoken to about? The article suggests they have a rather strict policy on exactly what moral values can be taught but this opens up the question of why it's okay for them to restrict free speech and not secular Government run schools.

It all stinks of rank hypocrisy. Either schools should set the guidelines or it should be a free for all. None of this having your cake and eating it too!

If you feel benevolent and particularly generous, this writer always appreciates things bought for him from his wishlist

"So do Catholics only value free speech and moral values when they are their own?"

It would appear so.

At the time of the controversy about RC adoption agencies refusing to place children with gay couples, and hierarchy spokesman saying it would be against the conscience of Catholics so to place them, I wrote a letter to the Glasgow Herald asking whether Catholics who believed there was nothing wrong with gay adoption had freedom of conscience, too.