Rejoin is the last, best hope of unionism

The man who brought us Brexit, and is now the Prime Minister of the United Kingdom, keeps on telling us he plans to keep the country together.

It is somewhat of a reach to suggest the rather hard (let's call it "medium rare") Brexit he is going for now is compatible with the continuation of our Union.

In 2014 Better Together ran a campaign to keep Scotland in the Union which featured continued EU membership as one of the benefits of voting "No" in that year's independence referendum. 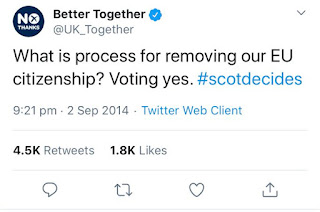 Not only does that make it rather awkward to suggest Scotland shouldn't now re-run that referendum (the entire constitutional basis has, after all, changed) it also seems likely that the Better Together campaign considered this a useful policy in winning over the wavering undecided voters to their side.

Scotland and Northern Ireland both voted to remain in the EU. Northern Ireland will be in a different customs area to Great Britain come Brexit. Scotland's latest polling suggests support of independence outweighs support for the Union and the nationalists are making EU membership a massive issue around which to build momentum for their referendum.

So it really does seem quite outrageous to think you can swivel from Brexiting to keeping the Union together.

Meanwhile a number of English Brexiteers (polling is... lacking) would rather happily see the back of Scotland (leave it a few days for the EU/Scotland love-in to abate then search "bye Scotland" on Twitter for example).


And so it seems clear that unionists, those who value the United Kingdom and who consider themselves British, need to try to find a way to keep our country together. Rejoining the EU is that way.

There's a caveat here: I don't think we will rejoin the EU anytime soon. The point is though that, as a unionist, I see that as the only plan that works. If done quickly enough it will take the wing out of the growing nationalist movements in Scotland and Northern Ireland and possibly swing some voters back to supporting the Union.


This is so unlikely as to be delusional. I'm not here to try to suggest the impossible is possible even though I think the impossible is the only solution.
However rejoin, as a long term goal, is the unionist "insurance plan". If Scotland and Northern Ireland leave the Union it seems almost certain both will end up, relatively quickly, in the EU in some way. If we are to keep our "family of nations" close together we can't do that unless we too are in the EU. We wouldn't be one sovereign nation any more. Yet we'd still be "Better Together" with the structure of the wider European Union. So this unionist, credentials available throughout the many posts on this blog, won't give up on rejoin. No matter how unlikely a goal it is. No matter how distant a goal it is. It'll be worth the fight.
Posted by Jae Kay at 13:22